If my grandfather was alive, he'd be 103 today.
Let me tell you a little about my grandfather. He had many names: Leo, Dad, Uncle Leo, Papa. Whatever people happened to call him, there's one thing for sure; they all loved him. He was one of the best men I've ever known.
One of my favorite Papa stories is this one:
Papa was very hard of hearing. You basically had to scream for him to hear you. My best friend, Laurie and I would always stop by Papa's to see him....it didn't hurt that his house was on the beach. Laurie and I have been best friends since 5th grade. Papa had known her for a very long time. One day, as we were heading over to his house, Laurie said to me, "can you please tell Papa my name? I don't think he knows it." I said, "what?! Of course he does. Don't be silly." When we got there, I did say (well, scream) to him, "Papa, you remember Laurie?" His response? "Yeah, I know Dorothy." I was laughing too hard to correct him. In the years to come Laurie would often stop by Papa's, with her boyfriend or other friends, and he still called her Dorothy. 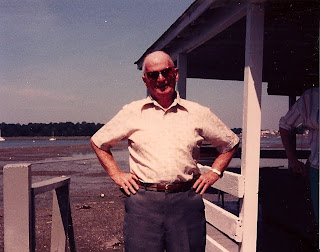 Papa at the cottage
Papa died in 1996 after a battle with cancer. We still gather at his house ("The Cottage") every fourth of July.
I still miss him. I can't help but think of him when I smell moth balls and salt air. 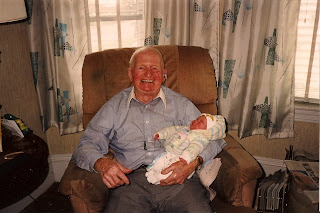 Papa with my nephew, Bryce 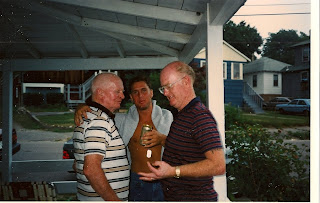 Papa, my brother, my dad
Posted by Loopy

Promote Your Page Too