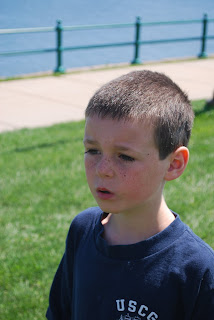 My 7-year-old nephew, Harry, is a bit of a money hoarder. If you give him a dollar he runs right to his room to put it in his wallet. His 6 -year-old brother, however, spends every dime that he gets.
Recently Kelly opened a bank account for Harry. Whenever we drive by the bank (which is near my parents house) he says, "there's the bank where my money is." He also wanted to let my dad know. Here's how that exchange went:
Harry: "Grampy, there's the bank where my money is."
Gramps: "Oh, that's great buddy."
Harry: "Gramps, since you live so close to the bank, can you keep an eye on my money?"
Gramps: "Sure. Good idea."
Well, yesterday the bank got robbed. No one was hurt, thank God. When Kelly found out, she immediately said, "don't tell Harry! He'll be devastated." That's all my dad needed to hear. He keeps saying that he's going to call Harry and tell him that the robbers left everyone else's money but got his. We're doing our best to keep Harry and Gramps apart.
Posted by Loopy

Promote Your Page Too